When I first heard about Dr. Russ Reinbolt’s decision to run the circumference of Hawaiʻi Island to both honor his father and raise funds for wildlife, I thought it was in equal parts impressive and insane. But I suppose that is true for many ultramarathon journeys, which is anything that’s over the standard marathon – 26.2 mi or 41.2 km, the most common distance being 31.1 mi or 50k.

While Hawaiʻi Island has an ultramarathon offered each winter by the Big Island Road Runners with their Hilo to Volcano race, this “Go Big” 260-miles-around-the-island race with Hawaiʻi Mountain Running was a whole different ballgame. Russ flew out from his home in California and finished the race 89:42 hours after he began and wrote about his own story here. That was in late 2020 spanning into then “New Year” of 2021. At that time, local ultramarathon runner from Pāhoa, Justin Young, had also signed up (and was the first to start and accomplish this amazing feat!).  Justin and Russ were the only two runners to complete the 260-mile event that first year. 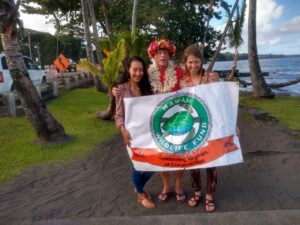 Runner Russ at the Hilo Bayfront after completing his first Go Big 260 event with local crew members, Jordyn and Emily.

But this past November, Russ let us know that he had decided to tackle the crazy “Go Big 260” mile journey again (along with four other runners this second year that it was offered by Hawai‘i Mountain Running). And not only did he accomplish his objective, but he shaved five hours from his last year’s time and came in right before New Year’s at 8pm. Keep in mind that he began his journey from the Hilo Bayfront Lighthouse at 7 AM on December 28, so doing the math, that is 84:00 hours of mostly solid movement! He was refreshed and able to enjoy the football game the following day (and first day of 2022).

Whether you have had the opportunity to run a mile or 10 miles with Dr. Russ (highly recommended), or just read about his experience here or his own blog, it’s clear that he is a highly committed and perseverant athlete and friend of HWF.

“I learned so much from Russ on the road, supporting him as crew while he performed such a huge physical & mental feat, completing the GoBig260 for two years in a row now. As for this year, better weather, shorter, more disciplined stops, and an even faster Russ led him to a 4 hour faster final time. He is a living example and embodiment of how fierce willpower, determination, courage in the face of challenges be it painful blisters or stormy weather, can enable one to achieve our goals be it completing a 10k or 10 marathons over the span of four days, or any large goal in our lives.” — Emily Beeson, artist / resident of North Kohala and crew member for Dr. Russ in both events 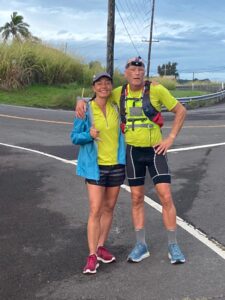 HMR runner and HWF supporter, Michelle, joins Russ for a long stretch from Kohala to Hāmākua.

Russ’ route was sent by Dr. Alyx Luck Barnett, of Hawai‘i Mountain Running (HMR), who inspires athletes around the globe to take better care of themselves and our planet, and to push their limits of what they thought was achievable. Since moving to Hawai‘i Island several years ago, Alyx and race participants have raised over $7,000 for HWF, as a portion of all of her proceeds benefit our on-the-ground conservation activities. Dr Russ himself, for example, has fundraised over $2,000 during his multi-year “Go Big 260” races, and introduced HWF to a whole new audience with his very sporty, and custom-made crew shirts featuring HWF logos this past year.

“The reason Hawai‘i Mountain Running races are so much more affordable than the typical ultrarun entry is twofold. One part is to ensure everyone (regardless of income) who wants to do the race can afford to do so, and the second part is to inspire the runners to donate anything they can to Hawai‘i Wildlife Fund. Dr. Reinbolt has not only run our races multiple times, but he makes personal donations to offset our “undercharging” as he calls it, but then he also fundraises with his own community and peers in honor of HWF. We are very grateful to our runners for helping HWF in whatever capacity they are capable of and we look forward to seeing Russ at another event soon! If you want to join our Hawai‘i Mountain Running races but cannot afford to do so, we happily accept entries in trail maintenance [with us] or volunteer hours with HWF.” — Dr Alyx Luck Barnett

Other HWF volunteers and HMR crew members helped support Russ’s race both this year and last time, and goodness knows we will be there again to help him next year if he chooses to make it an annual adventure.

Cheers to you, Dr. Russ!  We are so humbled and inspired by your charitable running accomplishments! Even if we do think it is small-kine crazy, it is a good kind of crazy. 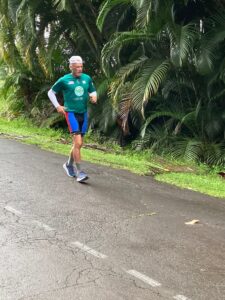 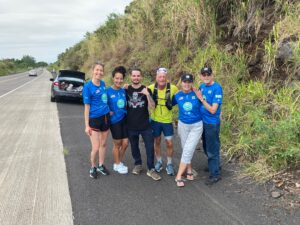 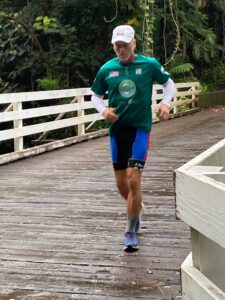 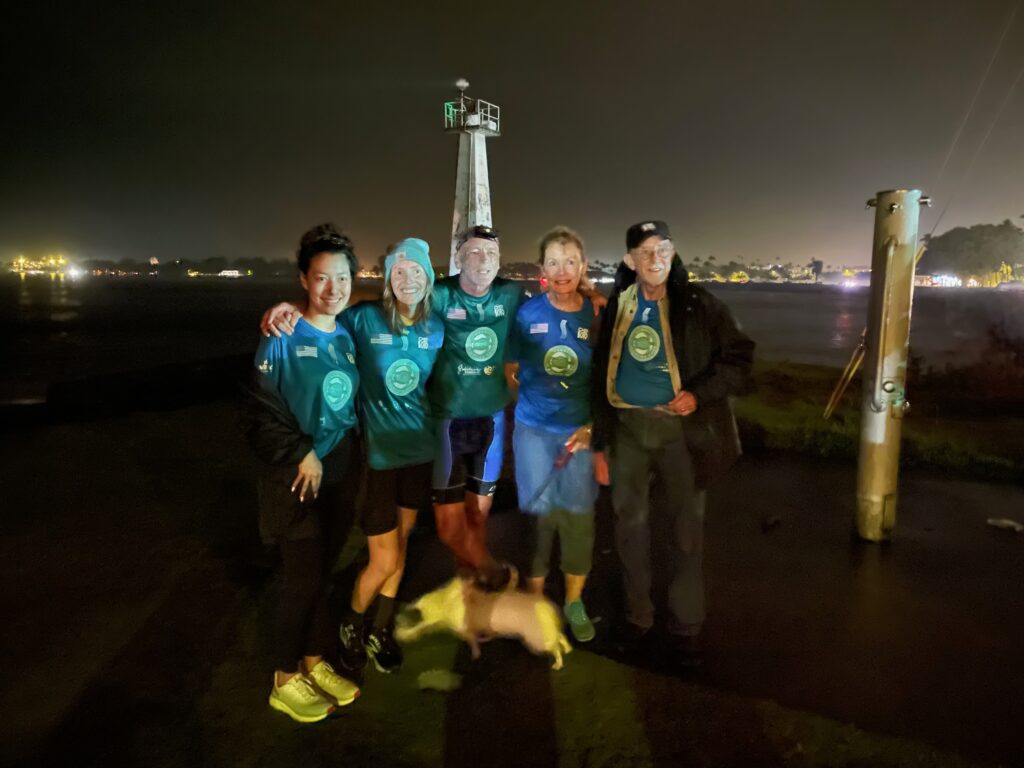 Runner Russ at the finish line just before New Years Eve (of 2022) at the Bayfront Lighthouse in Hilo with his crew (Jordyn, Emily, Lisa, Stewart) and support pup!