This guest blog was shared by our friends with Ka ‘Ohana O Honu‘apo.

This summer, Honu‘apo was blessed by a visit from a rare guest. New Ka ‘Ohana O Honu‘apo (KOOH) Board member, Jodie Rosam, was enjoying a small birthday gathering when a few folks at the party pointed out a seal napping on the pāhoehoe flat at the far north end of Honu‘apo Bay. Rosam reached out to fellow KOOH Board member, Megan Lamson, and she alerted NOAA (National Oceanic and Atmospheric Administration) and Ke Kai Ola representatives about the observation.

According to Hawai‘i Wildlife Fund, Hawaiian monk seals (Monachus schauinslandi) are the only truly tropical seal in the world and are critically endangered. The most recent estimates tally around 1,400 monk seals remaining in the entire Hawaiian Archipelago, though they are more common in Papahānaumokuākea (Marine National Monument). They have two Hawaiian names, ‘ilio-holo-i-kauaua (literally translating to “dog that runs in the sea”, and na mea hulu, or “precious / esteemed thing”. 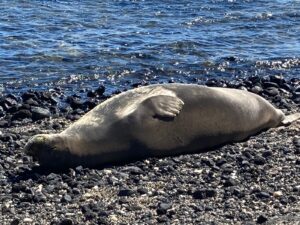 Monk seals are uncommon but truly esteemed guests along the Kaʻū coastline, and have been occasionally sited at Honu‘apo, and also in the recent past by Hawai‘i Wildlife Fund and Ala Kahakai Trails Association volunteers at Kāwā, Kalihipali, Waiʻōhinu, Kiolaka‘a, and Kamā‘oa. KOOH Board members recommend that you view monk seals from a respectful distance and allow them to haul out to rest and pup as they wish. Please keep your dogs leashed and off-road activity to a minimum when they are near and never attempt to feed them or acclimate them to humans, they are wild animals and any interactions can cause harm to them or you. 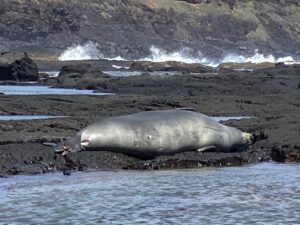 Per HWF’s website: “Monk seals are mostly nocturnal feeders with a very diverse diet including eels, octopus, lobsters, and fish. They come up onto land to rest, and to give birth and nurse their young. They are very sensitive to human disturbance at their haul-out sites. Mother monk seals nurse their pups on the beach for approximately 6 to 7 weeks and must not be disturbed. Although their total numbers are decreasing every year in the Northwestern Hawaiian Islands, those monk seals born in the Main Hawaiian Islands are surviving better and need our continued vigilant protection.” According to The Marine Mammal Center’s Ke Kai Ola staff, there are approximately 10 seals that frequent Hawai‘i Island, including the one seen last month (known as R8HE) that was identified based on the mobbing scars on her back. On other islands at the north end of the Hawaiian Archipelago, there is a skewed sex ratio and far more male seals than females. This sometimes creates a situation when multiple males will “mob” a single female, and it generally leads to injuries (or even death). Fortunately, this seal that was likely born in Ni‘ihau recovered from her 2016 attack but she still wears the scars from this event. Hawai‘i Island may be a safer haven for Hawaiian monk seal females since they outnumber the males and have more room to roam.

But there is a special history (or herstory) for seals at Honu‘apo. One might even say that they come to bring us a message of hope for protecting and restoring our coastal ecosystems, and are a makana (gift) from the ocean.

It was said that the rare sighting of a Hawaiian monk seal by late videographer and Kaʻū resident, Danny Miller, for his documentary short called “Saving the Kaʻū Coast” was the reason that our community was able to secure the extra 225 acre parcel adjacent to Honu‘apo Bay back in 2005. According to Ka ‘Ohana O Honu‘apo co-founder and past Board member, Wendy Scott-Vance, “He [Danny] went to Honuʻapo to get some footage for his film and through some great good fortune (providence, divine intervention?) an endangered monk seal swam into the estuary and virtually performed for his camera!”
Danny then testified along with many other Kaʻū community members and Ka ‘Ohana O Honu‘apo supporters to the Hawai‘i County Council and brought this above video – avail here – to share as testimony. “At the end of the video there was not a sound in the Council chambers and the very County Council members who had been opposed to the funding were in tears. The funding was approved unanimously. It is said in Kaʻū that that monk seal had ‘sealed the deal’ and that the proposal got a ‘seal of approval’” shared Scott-Vance.

Perhaps the same is true for this past visit. Rosam observed the seal (R8HE) swim back out to sea after having a nice long afternoon nap. Rosam was pleased to see her, or “Nessie” as she was later nicknamed, able to enjoy the day at Honu‘apo like her own ‘ohana. 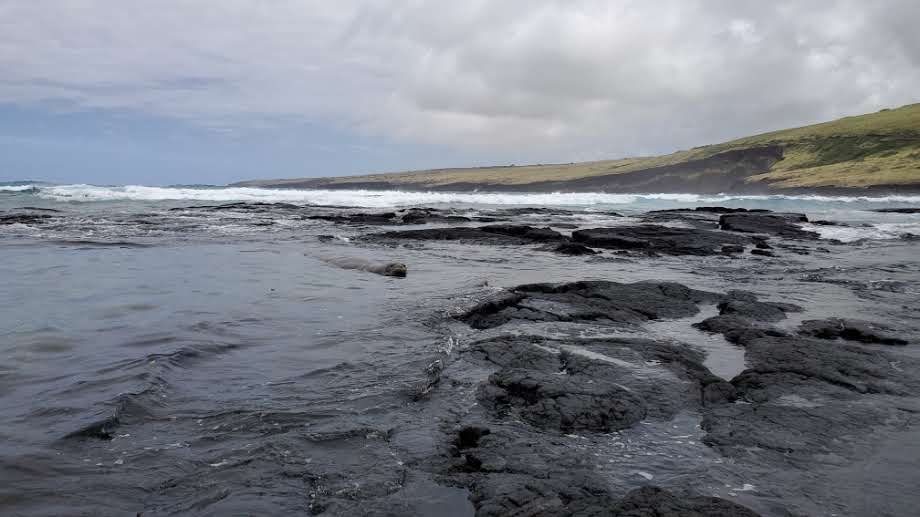 KOOH hosted its first ever “wetland workday” and took the first steps (or stones) to restore the kuapā (rockwall) of the loko i‘a (fishpond) in late March after delaying their planned efforts to begin work in 2020 due to the pandemic. KOOH Board members look forward to hosting small groups of community volunteers and local youth groups over the coming months, and plan to advertise these events on their FB page (www.facebook.com/kaohanaohonuapo) and through the Kaʻū Calendar. The last event took place on July 31st and the next one is happening on Saturday, September 25th, 2021 (on the last Saturday of every other month). Please RSVP to kaohanaohonuapo@gmail.com for more info as space will be limited to 20 participants to ensure loko and volunteer safely. Check out the KOOH website for more history about Honu‘apo and the community NGO.

This guest blog was shared with HWF by Ka ‘Ohana O Honu‘apo (KOOH) Board members on August 7, 2021.  A portion of this story was featured the same day with the Kaʻū Calendar News Briefs and appeared on the front page of The Kaʻū  Calendar’s September 2021 edition.