HONOLULU (KHON2) – It was an eye-opening mission off the Kona coast of Hawaii Island.

Two separate debris cleanups remind us that much of the waste in our waters is because of us.

DLNR, State Parks, Hawaii Wildlife Fund and many from the Hawaiʻi Island community partnered together to remove nets, plastics and other debris from Keawaiki and Puako Bays in Kona…. 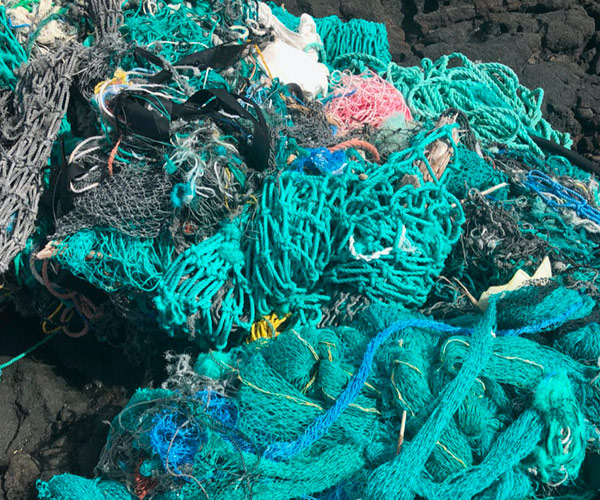 The EPA’s ruling on two beaches overwhelmed by marine debris could eventually force the state to take action elsewhere.

To get to Kamilo Beach, a Hawaiʻi shoreline notoriously plagued by plastic pollution, you need an off-road vehicle that can handle the hourlong, stomach-churning drive over dirt, dust and lava rock to the southern edge of the Big Island.

Staff and volunteers with the Hawaii Wildlife Fund have been making this rugged trip regularly for almost two decades. Since 2003, they’ve hauled a reported 290 tons of debris off the remote beach and surrounding coastline, including fishing nets so heavy that they needed a winch placed on a truck to lug the material from the shore.

These days, Kamilo looks cleaner than in years prior — at least at first glance. The frequent cleanups, sustained during the COVID-19 era, manage to keep the larger debris from piling up.

But look more closely and thousands of tiny plastic fragments still remain, dotting the shoreline with artificial pinks and blues and other bright colors that don’t belong.

Please CLICK HERE to read the entire article, with images and interviews, on the Civil Beat website. 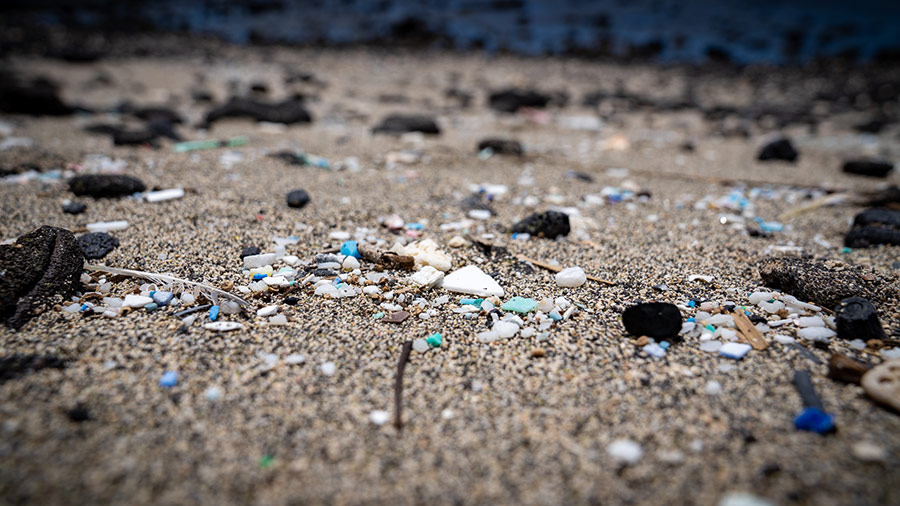 July 2020 - Navy's plans to detonate at Molokini on hold 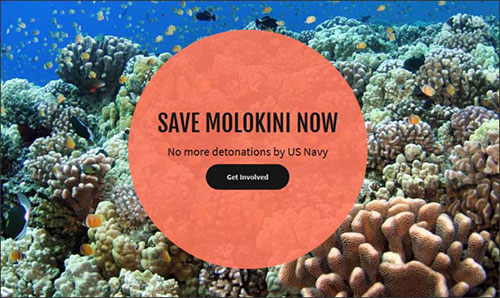 We did it! Molokini Marine Life Conservation District, a treasured marine reserve off the coast of Maui, is no longer in imminent danger. Working together, Hawaiʻii Wildlife Fund, Mike Severns Diving, Extended Horizons and community member Ameera Waterford sounded the alarm and collected 160,000 signatures in four days to prevent the US Navy from detonating a sunken ordnance that could have caused irreparable damage to this unique coral reef of the coast of Maui.

During WWII Molokini was used for target practice by the military both from air and sea. Some of those pieces of ordnance were detonated by the Navy in the 1970s and ’80s causing destruction to coral reef and the deaths of thousands of fish.

In 2018 two pieces of unexploded ordnance were reported to state officials, who contracted with the Navy to “remediate” them, even though they had been there for 70 years. Shockingly, the Navy had firm plans to use detonation as the solution again!

We consulted with community leaders and together sent the government our collective voices asking them to stop this, no matter what it takes. Non-destructive and safe removal or leaving in place are the only acceptable options.

“We have experience with the Navy’s detonations at Molokini and know that they can destroy the reef. Molokini is an important place culturally and environmentally and home to endangered species like hawksbill sea turtles and Hawaiian monk seals that are protected by law. Detonation is not acceptable,” said Hannah Bernard, Executive Director, Hawaiʻi Wildlife Fund. 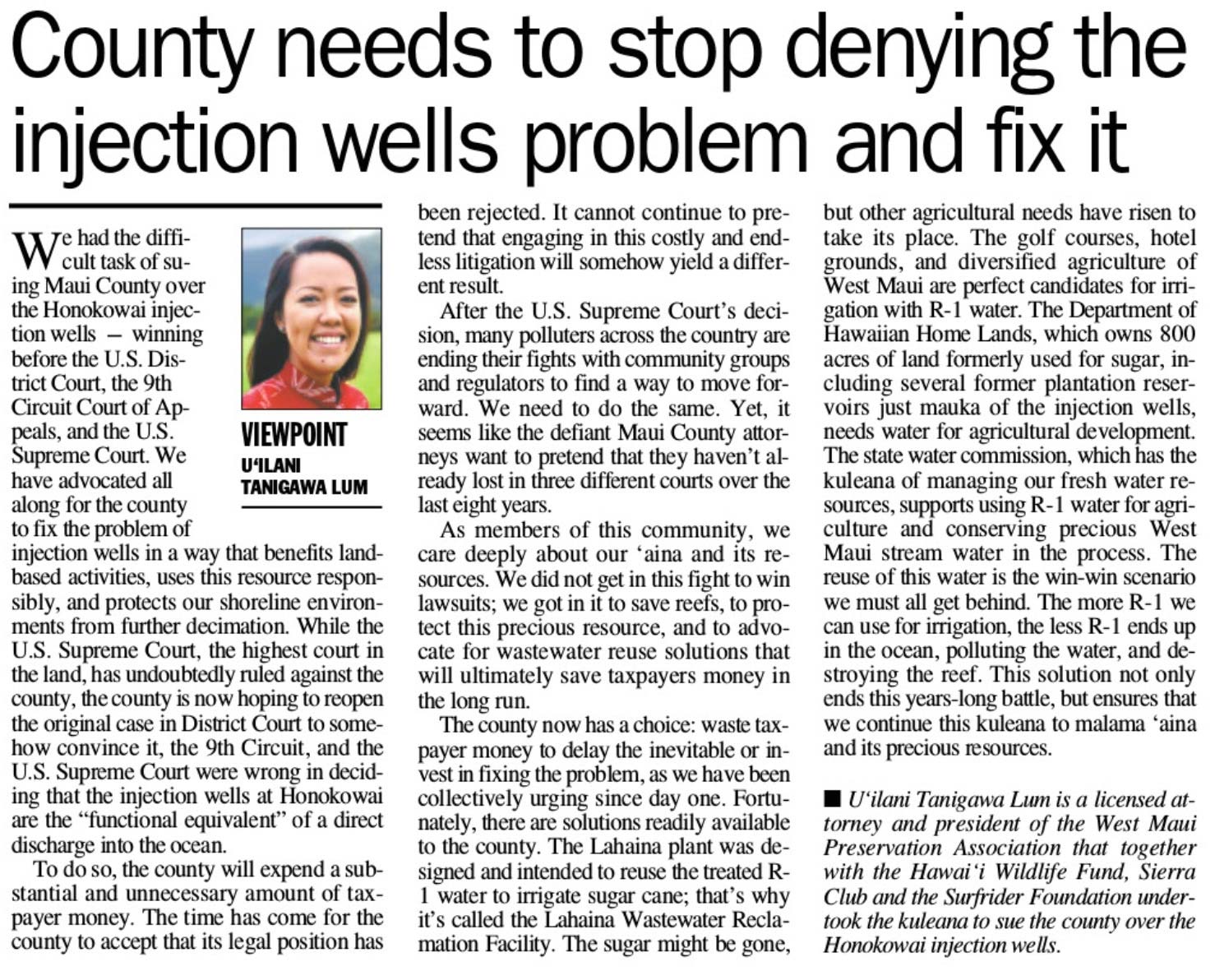 We, the people who challenged Maui County over its Lahaina injection wells, offer this joint statement in response to the U.S. Supreme Court’s April 23 ruling in our case. Our four groups – Hawaiʻi Wildlife Fund, Sierra Club Maui Group, Surfrider Foundation, and the West Maui Preservation Association – have advocated long and hard for the County to clean up its Lahaina wastewater mess. With this important victory at the highest court in the land, we’re one step closer.

The Supreme Court made clear that pollution cannot be released into navigable waters such as our ocean without a permit. You cannot get around that requirement by dumping the pollution into a hole near the ocean because that is the “functional equivalent” of dumping it into the ocean.
We, and people across the country, breathed a huge sigh of relief. The Supreme Court ruled firmly on the side of clean water, and against large-scale polluters that were looking for a groundwater loophole. From a strictly legal point of view, we got what we wanted, and the nightmare scenario of an open door for polluters was avoided. For clean water advocates across America, this was a big, big win.

To help the public understand more clearly what the Supreme Court decision means to our community, we will be posting the answers to some of the questions that we have been hearing from the community. We will also host a webinar in mid May where the community can get answers to specific questions about this historic case, its implications, and how we can move forward together to seek long-term solutions.

The Supreme Court sent the case back to the Ninth Circuit Court of Appeals – which has already ruled that the County cannot avoid the permit requirement – to re-evaluate our case in light of the Supreme Court’s “functional equivalent” standard. The Ninth Circuit may, in turn, send the case back down to the federal district court that originally heard the case. Both the district court and the court of appeals have already ruled that the discharges from the Lahaina injection wells are the functional equivalent of direct discharges into the ocean and, thus, require a Clean Water Act permit. We are confident that they will do so again.

But we didn’t get in this fight to win lawsuits; we got in it to save reefs. The County now has a choice between delaying the inevitable by spending more taxpayer money, dragging out the lawsuit, or investing in fixing the problem, as we’ve been urging since day one.

Fortunately, there are solutions available, and they’re staring the County right in the face. The Lahaina plant was designed and intended to re-use the treated R-1 water to irrigate sugar cane; that’s why it’s called the Lahaina Wastewater ReclamationFacility. The sugar might be gone, but other agricultural needs have risen to take its place. The golf courses, hotel grounds, and diversified agriculture of West Maui are perfect candidates for irrigation with R-1 water. The Department of Hawaiian Home Lands, which owns 800 acres of former sugar land, including several former plantation reservoirs just mauka of the injection wells, needs water for agricultural development. The state Water Commission, which has the kuleana of managing our fresh water resources, supports using R-1 water for agriculture, and conserving precious West Maui stream water in the process.
Re-use is the win-win scenario we should all get behind. The more R-1 we can use for irrigation, the less R-1 ends up in the ocean, polluting the water and destroying the reef.

The County Administration has already blown through millions of taxpayer dollars paying its hired gun mainland lawyers to make arguments that the Supreme Court ultimately rejected as “unreasonable.” It’s time for the government to stop kicking the can down the road and wasting money on a losing fight, and invest in the long-term health of our West Maui community instead. Working together to solve the problem will be the real win, and we remain committed to doing so. We are so grateful to the hundreds of community members and organizations who have shown up to support this historic effort for clean and healthy ocean waters.

APRIL 23, 2020 – WASHINGTON, D.C. — Today the Supreme Court issued its opinion in County of Maui v. Hawaiʻi Wildlife Fund siding with clean water advocates that point source discharges to navigable waters through groundwater are regulated under the Clean Water Act.
The following is a statement from David Henkin, Earthjustice attorney who argued the case defending clean water:

“This decision is a huge victory for clean water. The Supreme Court has rejected the Trump administration’s effort to blow a big hole in the Clean Water Act’s protections for rivers, lakes, and oceans.” 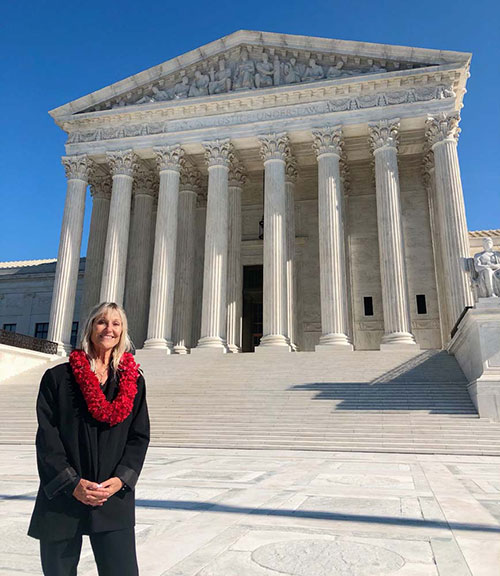 Hawaiʻi Wildlife Fund’s Executive Director Hannah Bernard is traveling from Maui to Washington, D.C. this week to witness whether the Supreme Court will paint a roadmap for every polluter in the country to avoid regulation of the discharge of their pollution by the Clean Water Act.

The nation’s highest court will hear oral arguments on Wednesday, Nov. 6 in County of Maui v. Hawaiʻi Wildlife Fund, a case that will decide whether the Clean Water Act regulates pollution discharges that “indirectly” enter protected waters, the outcome of which could imperil clean water across the nation. Oral arguments start at 10 AM EST.

“We hope that the letter and intent of the Clean Water Act are upheld by the US Supreme Court in our case, and that they rule in our favor, as the two previous courts have done, and continue to protect the nation’s lakes, rivers and nearshore waters,” said HWF’s Bernard. “After 12 years of fruitless negotiations and filing of this lawsuit, we are dismayed that our case was elevated to this level by Maui County’s mayor, since it defies the will of the people of Maui and the Maui County Council to protect our reefs.”

The case concerns a Maui wastewater facility that discharges millions of gallons of treated sewage each day into the Pacific Ocean via the groundwater beneath the facility, which has devastated a formerly pristine reef.

The County of Maui argues it does not need Clean Water Act permits for such an action because it is not discharging directly into waters protected by the Clean Water Act. However, the Clean water Act does not require a strictly “direct” injection of wastewater in waters of the U.S.

Earthjustice represents four Maui groups — Hawaiʻi Wildlife Fund, Sierra Club-Maui Group, Surfrider Foundation, and West Maui Preservation Association.
“We are arguing against Maui County’s extremist position that unless a pipe goes directly into the ocean or a lake and river, it is completely unregulated by the Clean Water Act,” said David Henkin, staff attorney from Earthjustice’s Mid-Pacific office who will be arguing the case.

“If the Supreme Court endorses the county’s position, it would open a massive loophole for every polluter in the country to avoid regulation of their discharges by the law that protects the nation’s waterways,” Henkin said.

READ MORE: BACK STORY AT EARTHJUSTICE

Hawaiʻi’s corals are in peril, jeopardizing an important source of security, revenue and food for the state.

The ocean has been too hot for too long this summer for these tiny animals to handle. It’s causing the corals to expel the symbiotic algae that lives inside them, which leaves their bony skeletons fragile and white.

This is the third widespread coral bleaching in Hawaiʻi since 2014. It happened once in the 1980s and once again in the 1990s, scientists said, but it’s on track to become an annual event by 2040 without a dramatic reduction in carbon emissions globally and stronger resource management locally.

“The coral reefs of the future will undoubtedly look different than today,” said Jamison Gove, a research oceanographer with the National Oceanic and Atmospheric Administration. “But just how different will depend on us as a society.”

Government, university scientists and satellite companies have partnered to document the current bleaching event, which includes a way for citizens to report what they see in the water via the Hawaiʻi Coral Bleaching Tracker website.