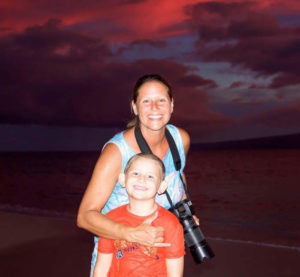 Aloha! I am wildlife photographer, Aimee Lemieux. I was born and raised in Detroit, Michigan, but have been lucky enough to call Maui my home since 1999. I’ve always had a love for animals and a great desire to help out wherever I can, so volunteering with Hawaiʻi Wildlife Fund (HWF) was a perfect match. I attended my first turtle nest excavation in 2014 and was hooked ever since. It is such a pleasure and an honor to be part of this amazing team of people. With the support of my wonderful husband and three kids, I am able to volunteer at all of the nests every year. I hope to see many more hatchlings make it to sea in the future! 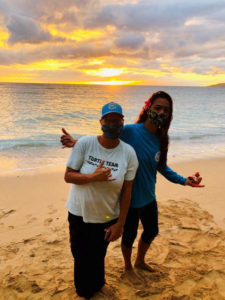 Volunteer photographers are witness to many extraordinary moments working on HWF sea turtle projects (Hawksbill Recovery Project link), but this last season, while I was nestwatching, we helped to recover an illegal lay net before it could trap the emerging hatchlings. HWF’s Hannah Bernard and Magdalena Carey had witnessed several men setting the net the night before, and, after camping all night to watch over the nest, we noticed it was still set the next morning, which is illegal.  Magda and I swam out to examine the net and saw a live juvenile green turtle (honu) entangled, as well as an adult honu swimming nearby, in addition to many dead fish in the net. The team called DOCARE, the law enforcement division of the state’s Department of Land and Natural Resources, and took photos of a man pulling the net out of the water. DOCARE arrived on the scene immediately and were able to confiscate the net and dead fish. 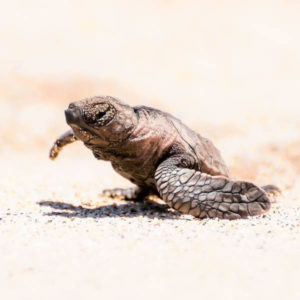 HWF update:  The investigation is pending, but thanks to Aimee’s involvement with Hawaiʻi Wildlife Fund, none of the 85 hatchlings that emerged from the nest that morning were entangled in the illegal net.