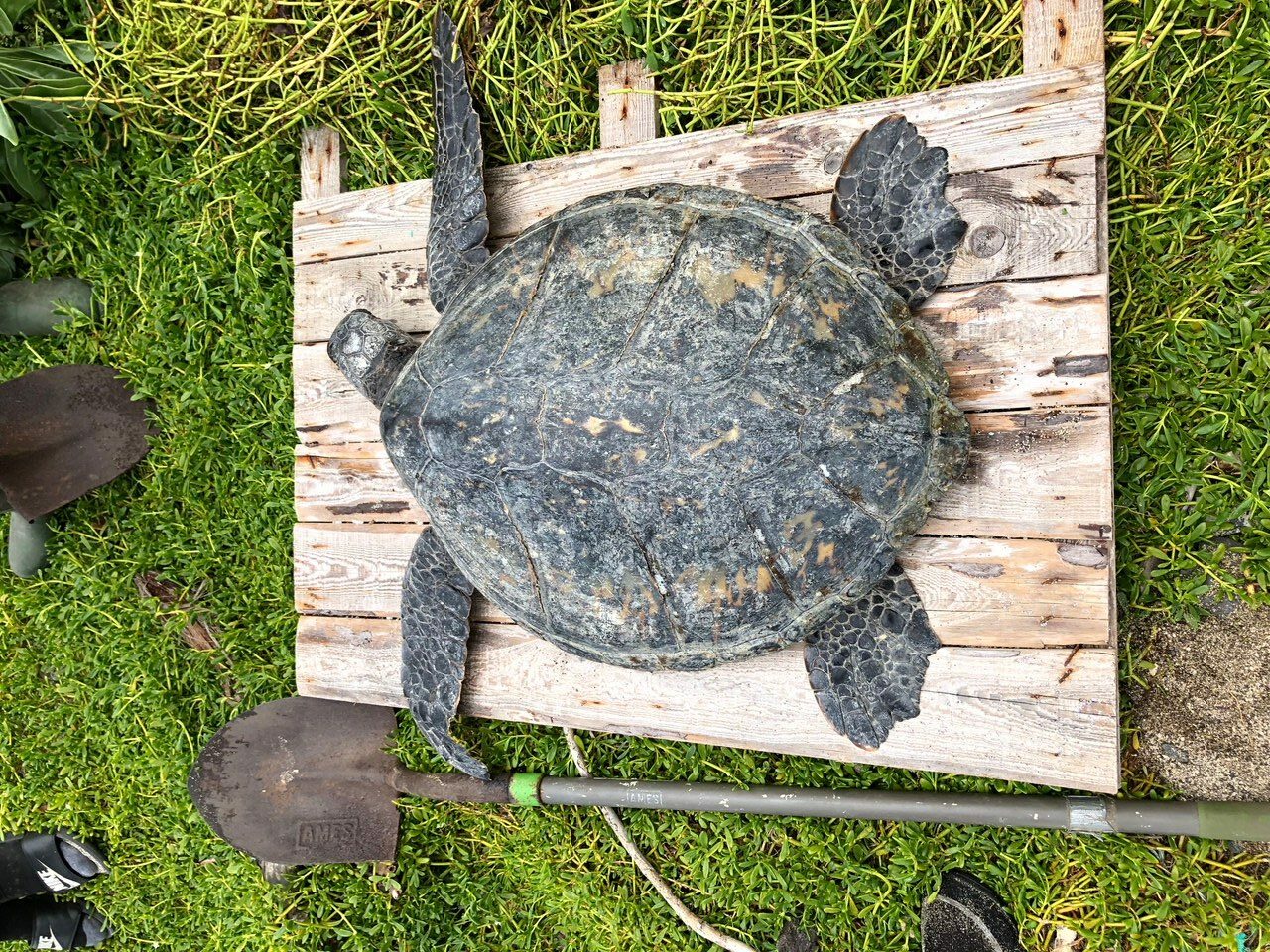 Mahalo to community and NGO volunteers with Maui Ocean Center Marine Institute (Maui), UH Hilo (East Hawai’i), Hawai’i Preparatory Academy (North Hawai’i), H-MAR (O’ahu) and Hawai’i Wildlife Fund (Maui & Ka’u, Hawai’i) and staff with NOAA and the DLNR Division of Aquatic Resources’ Protected Species Program for helping to support turtle strandings across the state.  What is a sea turtle stranding? A stranding is when a marine organism is injured, deceased, or otherwise unable to get back out to sea.  Help us by removing any littered fishing line or marine debris items you see along the shoreline!

“(Wailuku, Hawaii) – A total of 276 sea turtle strandings were documented on Maui in 2020, a nearly 100 percent increase from 2019, according to data from the Maui Ocean Center Marine Institute.

All 276 sea turtles stranded last year were green sea turtles. Of the stranded turtles, 250 were found alive; the others had died, according to the Marine Institute’s recently released Sea Turtle Conservation Program 2020 Annual Report.

While fishing gear and other marine debris continue to pose a threat to turtles, Thomas Cutt, executive director of the institute, said the increase in documented strandings also could be due to the organization’s improved presence in the community.

“In the past three years, our organization has grown significantly,” Cutt said in an email Monday afternoon. “We are receiving an increased number of reports of stranded turtles, basking turtles and our tagged turtles.”

As the nonprofit arm of the Maui Ocean Center aquarium in Maalaea, the Marine Institute coordinates responses to sick, injured, distressed or expired sea turtles on Maui, according to its website. Formed in April 2016, it also promotes stewardship and ensuring the survival of coral reefs and sea turtles.

Last year, the majority of the turtles (230) were stranded due to “fishery interaction,” including 124 that were entangled in fishing line, according to the report. Others were injured from hooks and/or nets.

When asked if a rise in outdoor activities during the COVID-19 pandemic may have contributed to the increased encounters with fishing gear, Cutt acknowledged that the “primary threat” to sea turtles in Hawaii is the interactions with nearshore coastal fisheries, but that “unfortunately, it’s very difficult to quantify recreational fishing effort.”

“We are focused on working collaboratively with the recreational fishing community to reduce threats,” Cutt added.

Maui Ocean Center Marine Institute Volunteer Lead Responders Alan Espiritu and Bruce Weyermann release a sea turtle patient back into the ocean at Po‘olenalena Beach Park in this undated photo. A total of 276 sea turtle strandings were documented on Maui in 2020, nearly double the 141 strandings seen in 2019, according to the institute’s recent report. Maui Ocean Center Marine Institute (MOCMI) photo.

The institute asks that fishers contact the Sea Turtle Response hotline if they accidentally hook or entangle a sea turtle and that they make an effort to retrieve lost gear and deposit old lines in fishing line recycling bins. The institute has been working to install dozens of fishing gear recycling bins at high-traffic shoreline fishing locations around the island.

Cutt said the organization decided to continue to respond to stranded turtles during the pandemic.

“We adjusted our protocols and limited the number of volunteers and staff members on-site at one time to ensure the safety of our team and community,” he explained.

In addition to fishing gear, turtles also faced threats from boats, natural predators and their own surroundings — nine were stuck in rocks, eight stranded due to a shark bite, four suffered from buoyancy disorder, two were stuck in the sand, one suffered from disease and another from a boat strike. Six were stranded due to other causes and 15 due to unknown causes, the report said.

August had the most strandings last year with 42, followed by July with 41.

When the institute assists a turtle, staff record information such as the time and date of the stranding along with other details about the turtle, which can be taken in for treatment if needed. Before a turtle patient is released, staff also install a passive integrative transporter tag similar to a microchip in a dog or a cat, but under the skin of the turtle’s hind flippers. The size of a grain of rice, it can be detected by a scanner.

A Mototool tag is also placed on the turtle’s shell by using a Dremel to safely etch the shell with the initials of the island and the number of the stranding case. The groove is then filled with white paint that does not harm the turtle but makes it easy for observers to view the turtle’s number without disturbing it, the report said.

The tags allow observers to see how the turtles are faring and also gain more data on the turtle’s foraging habitats, migration and distribution.

Despite the pandemic, 2020 was a busy year for the institute, which received a donation to build its first dedicated space to treat sick and injured sea turtles on Maui. The Stevens Family Honu Rescue Lab was built in a refurbished shipping container at the Ocean Center. It includes waterproof walls and flooring, a stainless steel treatment table, controlled drug cabinet, pharmacy cabinet, waterproof veterinary scale, centrifuge, blood chemistry analyzer, sink and storage space for medical supplies and equipment, the report said.

In 2020, the institute also expanded its sea turtle program to include long-term rehabilitation.

It continues to work in close collaboration with the National Oceanic and Atmospheric Administration Fisheries, meeting weekly to discuss patient progress, treatment plans and criteria for release.

To report a sick or injured sea turtle on Maui, contact the Marine Institute’s Sea Turtle Response team at 286-2549.

By MELISSA TANJI | April 20, 2021 * Melissa Tanji can be reached at mtanji@mauinews.com.