Celebrating the Final Shipment of Coal to Hawaiʻi

Yes, it’s true! Last week, Hawaiʻi officially received its final shipment of coal to the state, meaning we will be coal-free by the end of September 2022. We couldn’t be more supportive of this state initiative towards clean energy. All of this comes as a result of 2020 Bill SB2629, which bans utility companies from adding new coal-powered plants or extending existing contracts with coal-burning facilities after 2022. This aligns with the Governor Ige’s Hawaiʻi Sustainability Initiative, including 2015 Bill HB623, which set a goal of 100% generation of electricity sales from renewable energy resources by 2045.

A huge mahalo to our state legislators who pushed through the challenges to create a greener future for Hawaii’s residents and wildlife! 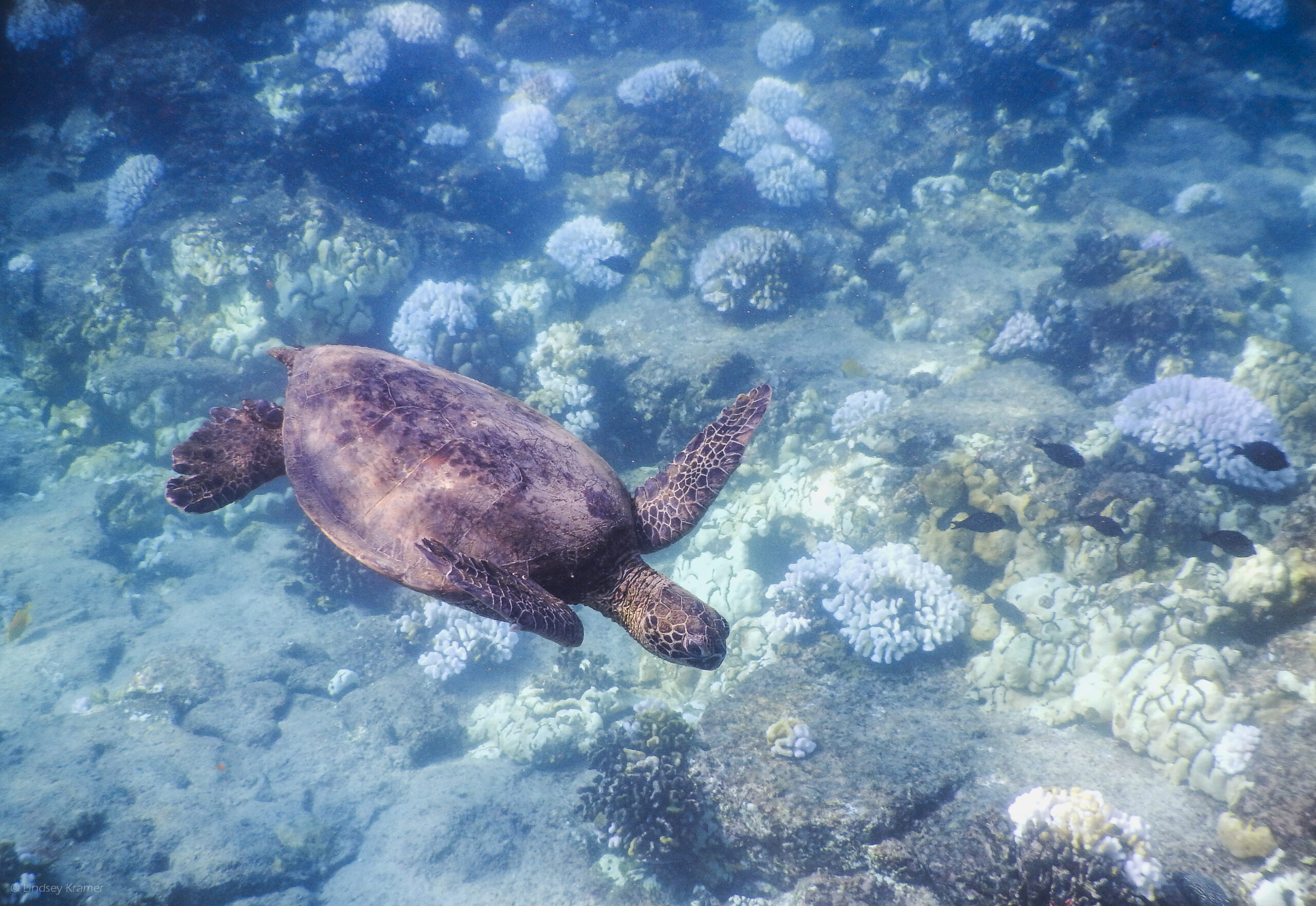 Coal has been a job and energy source for Hawaiʻi residents since the 1980s, and accounted for about 11% of the state’s energy use in 2020. The initial decision to use coal aimed to reduce Hawaii’s dependence on petroleum products. Because Hawaiʻi doesn’t produce any of its own coal, all coal had to be imported from around the world via ocean freighter, adding even more to its carbon footprint.

Air pollution from coal-burning plants has been linked with asthma, cancer, heart and lung ailments, and other severe public and environmental health issues. Coal-burning emissions are among the top offenders in creating atmospheric carbon, which directly contributes to the warming trajectory of our ocean. Warmer seas can cause a slew of other problems including increased frequency and severity of storms, rising sea levels, and more regular coral bleaching events.

Additionally, when burned, the sulfur in coal combines with oxygen to form sulfur oxide, which is a severe lung irritant. Sulfur oxide then combines with water when in the atmosphere, creating sulfuric acid and increasing the acidity level in rain. This more acidic rain causes damage to plants and native ecosystems and can impact our drinking water. 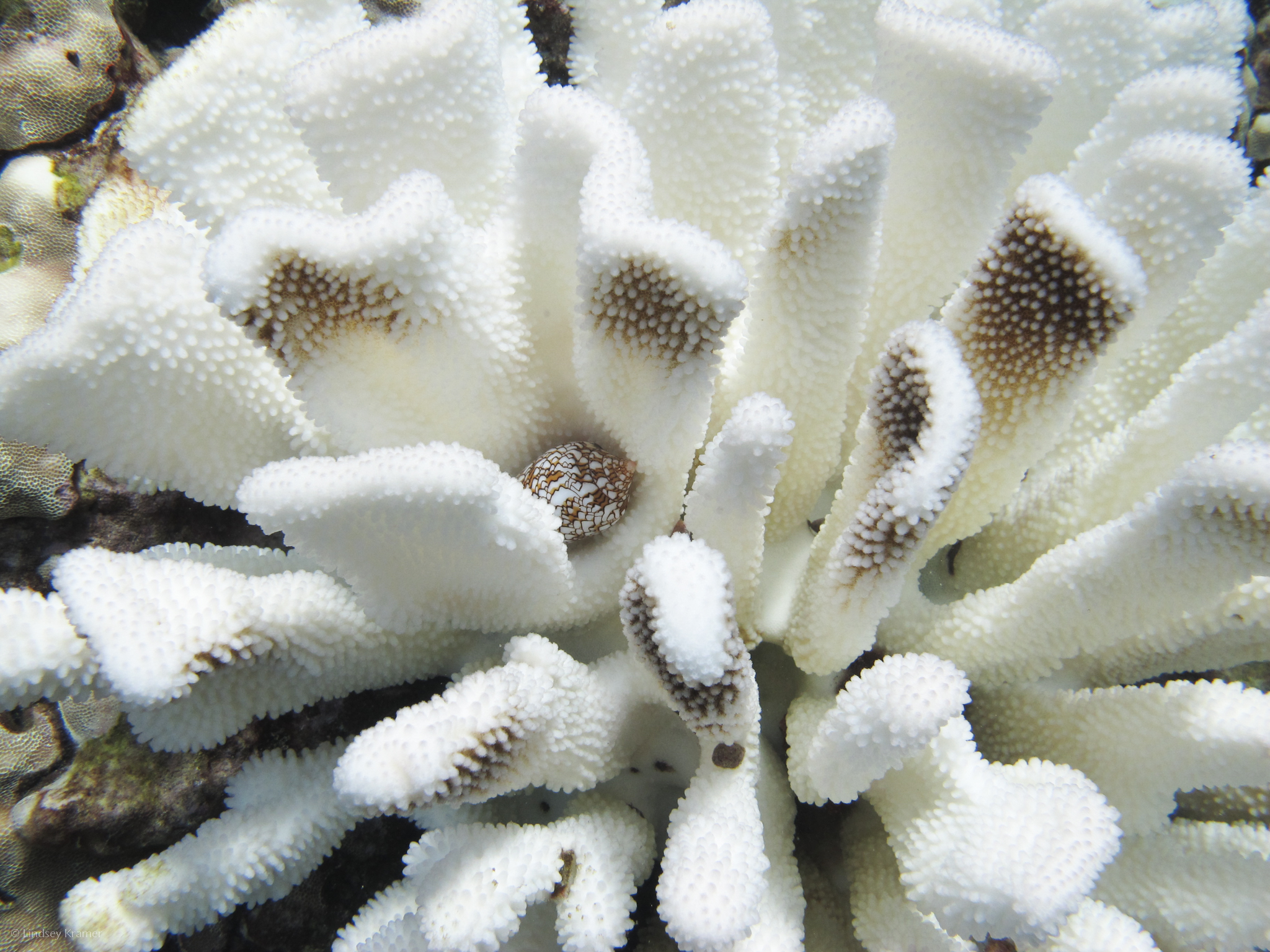 Coral bleaching is caused by prolonged warm sea temperatures and can result in a severe loss in reef habitat. Corals are able to survive in the bleached state for up to a few months, but will eventually die if temperatures remain high. This bleached branching coral (Pocillopora grandis) hosts a beautiful but venomous Textile Cone Snail (Conus textile). Image credit: Lindsey Kramer

How does coal-burning link to coral bleaching?

Carbon emissions from coal burning and other sources work as “greenhouse gases” in our atmosphere by trapping heat from the sun, causing warming average global temperatures, especially during the summer.

At a certain sea temperature threshold (usually about 82°F for Hawaiʻi), corals may begin to “bleach”, or change from a vivid color to a pale or bright white. This very stressed state occurs as corals eject their symbiotic plant cells (zooxanthellae), leaving behind a translucent coral with a visible inner white skeleton.

Hawaiʻi experienced its first regional-scale coral bleaching event in 2015, with a less severe event recorded in 2019. While corals can recover from bleaching if water temperatures cool down within a relatively short time-frame (a few weeks to months), without the presence of plant cells in their tissue, corals eventually starve from a lack of photosynthetic energy.

To learn more about coral bleaching, check out these great resources from the Hawaiʻi Eyes of the Reef Network: eorhawaii.org/education/ and www.wildhawaii.org/new-coral-reef-field-guides-from-eyes-of-the-reef-hawaii 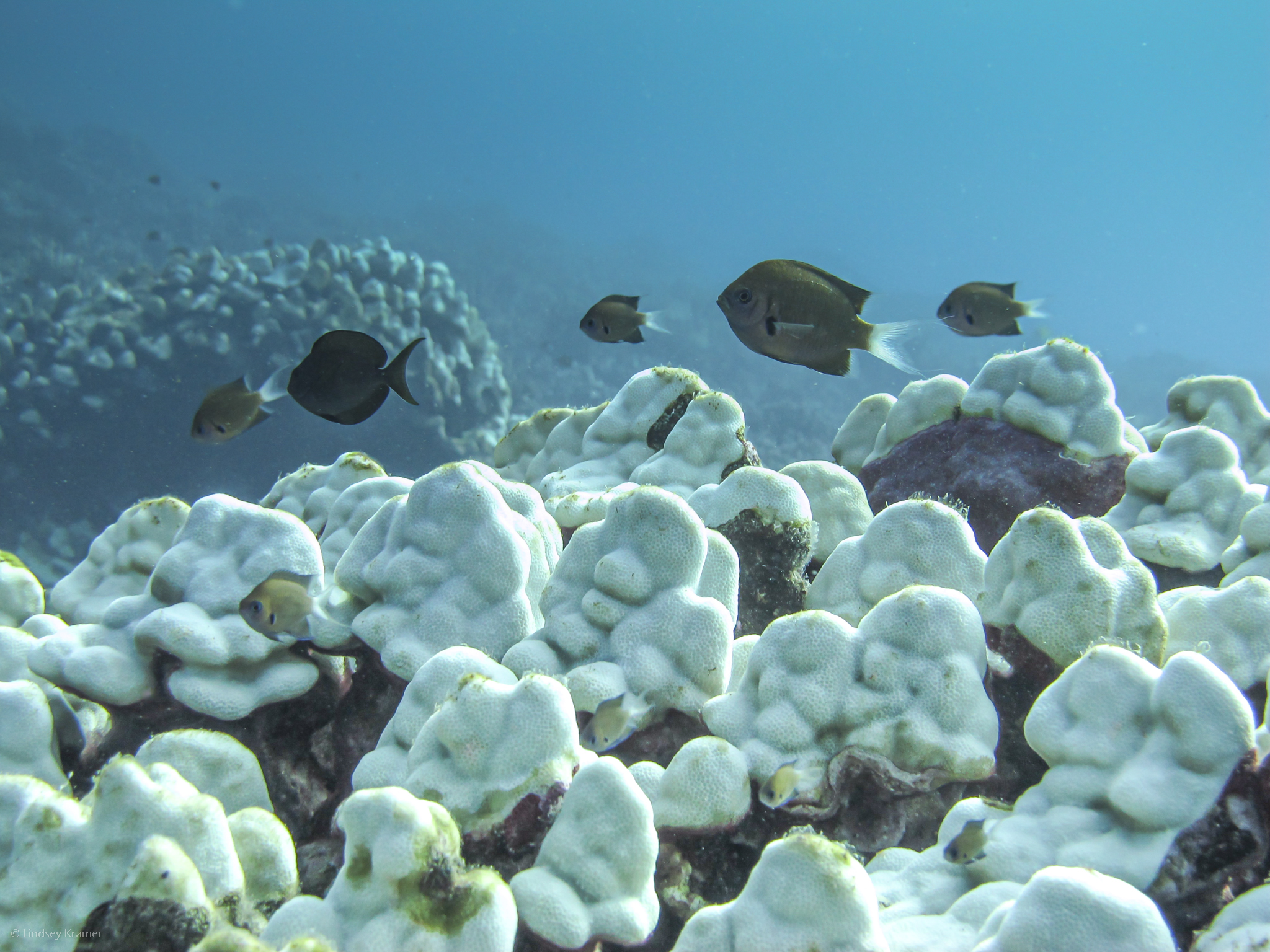 Agile chromis (Chromis agilis) swim over bleached mounding coral (Porites lobata) in West Hawaiʻi. Corals are able to survive in the bleached (thermally stressed) state for up to a few months, but will eventually die if sea temperatures remain high. Coral loss due to bleaching results in habitat loss for hundreds of other species. Image credit: Lindsey Kramer

How can I help?

First off, let’s acknowledge that we’re doing pretty well! Hawaii’s total electricity demand is the fourth-lowest in the nation, after Vermont, Alaska, and Rhode Island. On the other hand, our transportation sector accounts for almost 60% of the energy consumed in Hawaiʻi, due in large part to jet and marine fuel use. According to the U.S. Energy Information Administration (EIA), in 2020 was Hawaiʻi was consuming about 12 times more energy than it produced. However, we’re well on our way to sustainability, with renewable energy sources (including rooftop solar panels) sustaining 26% of Hawaii’s energy needs in 2020.

There are many day-to-day things we can do to help make Hawaiʻi greener:

Want to learn more about energy usage in Hawaiʻi? Check out these great resources: